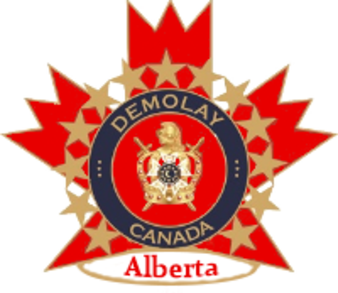 The name “DeMolay” comes from a thirteenth-century French hero named Jacques de Molay, who was the last Grand Master of the "Poor Fellow-Soldiers of Christ and of the Temple of Solomon", more commonly known as the Knights Templar. King Philip “the Fair” of France, who was interested in obtaining the vast wealth and land of the Templars in order to continue the crusades and conquest of the holy land, devised a plan which included arresting and torturing the members of the Order in hopes that they would divulge the location of all the Templar riches.

After being arrested and subjected to seven horrible years of torture and questioning by King Philip, DeMolay was put to death by order of the “fair” king because of his refusal to reveal the names of his fellow comrades, and for his fidelity to the ideals of his order. King Philip ordered DeMolay and one of his faithful preceptors, Geoffrey de Charney, to be burned at the stake as a final demonstration of Philip’s authority.

Centuries later, in 1919, a Freemason from Kansas City, Missouri, named Frank Sherman. Land, met with a fatherless young boy by the name of Louis Lower. The two of them got along well, and Dad Land realized the need for a young men's organization following World War 1 were so many youths had lost a father figure in their lives. Dad Land asked Louis to bring together a group of boys, and soon after the first 9 DeMolays gathered at the Kansas City Scottish Rite building. With Dad Land’s guidance and the ambition of the young men, the Order of DeMolay was born.

Almost instantaneously, the popularity of the new Order grew and within 2 years there were chapters in almost every state in the union and in 1923, DeMolay became an international organization when it opened up a Chapter in Winnipeg, Manitoba.

For nearly 100 years now, the Order of DeMolay has continued to teach it’s member’s the principles of life which will help prepare any young man for a good and clean manhood, and which will help them to develop a greater love and respect for their God, parents, and country.

In its history, the Order of DeMolay has grown an impressive list of alumni, including names such as Walt Disney, John Wayne, Pete Rose, Neil Armstrong, Thomas Douglas, Bill Clinton, Mel Blanc, Walter Cronkite, John G. Diefenbaker, and many, many more.

History of DeMolay in Alberta

Beginning in 1953 with the founding of Edmonton Chapter, DeMolay in Alberta grew rapidly and saw the initiation of hundreds of new members within several short years.

Chapters within the province have included:

Alberta DeMolay has provided a place for young men to hone their skills and build new talents in order to become the leaders of Tomorrow. Here you can take a step back through the pages of history, and view some of the names, by whose legacies this organization has continued to grow and prosper.